Backstage Calm During the Storm


Another successful Edgewood talent show this month! One more round next month! Since 2010, we have offered three lunchtime shows each year, with each production repeated for a grade K-2 and 3-5 student audience, plus a dress rehearsal.  Our production crew is made up of about a dozen staff members and three dozen students to pull off a lunchtime show.

Our first talent show of the year is usually in February. The learning experience in this first show is pure madness, as crew members stumble through production routines and responsibilities and are oblivious to the flow of the show. We're often too busy or confused to eat.

Typically, we hit our stride by that third show in May, when the team is a purring V8 engine. That's when the adult supervisors in the balcony and backstage are able to sit and eat lunch, while the students manage the production. But this year, our crew gelled quickly. This year in our second talent show, I snapped a group selfie without worry of distracting the crew and then watched the team execute a flawless production -- while I ate my sandwich. Great show everyone!  -- Paul Tomizawa
Posted by Edgewood Snapshots at 10:10 PM 1 comment:

It's not every day when one of your favorite authors comes to your school. For Edgewood fourth and fifth grade students, Skyping with author Cece Bell was part celebrity crush and part awe of her personal story. Her best selling book, El Deafo recounted her childhood struggles with her hearing disability. It was also the centerpiece and mentor text for the students' deep dive into a literary study of graphic novels led by district ELA coordinator Sue Luft. 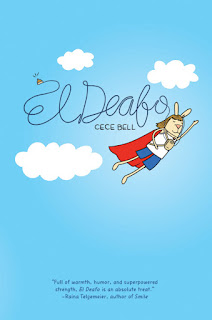 Bell was clearly impressed with our students' video chat etiquette and knowledge of El Deafo, peppering her with interesting questions such as, "Why did you choose to make everybody as bunnies?"

El Deafo has quickly become a touchstone text for Edgewood students, who memorialized it in our Centennial mosaic. The title appears in the lower right corner of the mosaic, underneath the red apple, in a stack of popular fiction books.

While Cece Bell has been our only author to visit us via Skype, we have had several others come to the Edgewood in person such as Kate Messner, Janet Tashjian, Todd Parr, Laura Marsh, and Jan Reynolds.

-- Paul Tomizawa
Posted by Edgewood Snapshots at 9:46 AM No comments: 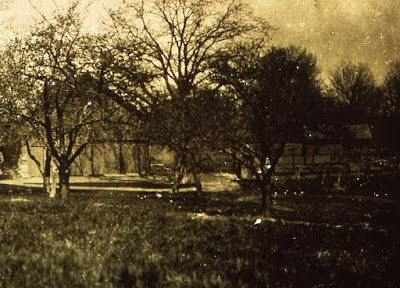 Edgewood School opened its doors 100 years ago in an apple orchard on the Cudner-Weed estate pictured above.
How fortunate for the teachers. An endless supply of apples! But according to Edgewood's first principal Mary Piedalue, the kids may have enjoyed life in an orchard the most. She once recalled that "When the apples fell into the children's hands, they made wonderful ammunition."
Carl Schorske, one of Edgewood’s first students, also remembered those apples. When he visited Edgewood in 2008, he told us that students gorged themselves on these Russet apples, also known as "rusty coats," for its skin texture and brownish color.

By the late 20th century these apples were gone from the Edgewood campus. But a few years ago, we started a comeback. A team of Edgewood historians and environmentalists, made up of staff and students, gathered in front of our school and planted a tree. An apple tree.


- Paul Tomizawa
Posted by Edgewood Snapshots at 10:58 PM No comments:

We have a fairly young tradition at Edgewood School. On the first day of school, the non-classroom teachers for Art, Library, Music, Physical Education, Spanish, and Technology coordinate a large multi-grade activity (read more about last year's event here). It's a high energy event that often feels like it's running alongside the edge of chaos, while managing to stay intact and on target with our objectives.

This year's program focused on the Edgewood Centennial. Students collected cutouts from posterized photos, depicting small moments in our school's history. They had to match their color coded pieces with those found by other students and together, reassemble the images. Students used their bodies and minds to meet the challenge. It was a noisy, fun day and sent a message that learning about the history of our great school was about to begin.
-- Paul Tomizawa

Students dash into the circle to collect puzzle pieces. 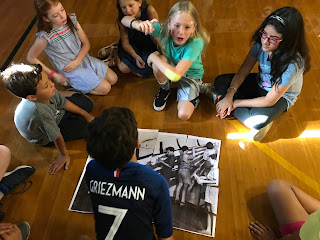 Posted by Edgewood Snapshots at 12:26 AM No comments:

Ruth Friendly, a popular Edgewood classroom teacher in the 70s and 80s, returned to our school this summer. She reminisced in her old classroom (Room 20) with former students, including our PTA President Heedan Chung, and shared stories that reminded us that we learn best when we're inspired to be our best.

Among the stories she shared connected teaching with journalism. She spoke of a time when she and her husband, journalism pioneer Fred Friendly, sat in a Scarsdale high school classroom and noticed a quote scribbled on the chalkboard. "The teacher's job is to make the agony of decision-making so intense you can escape only by thinking."

Mr. Friendly would go on to use this line in future interviews and in his lectures at Columbia University's Graduate School of Journalism because according to Mrs. Friendly, Mr. Friendly said the quotation reflects the journalist's job. He would later be credited with saying, "Our job is not to make up anybody's mind, but to open minds, and to make the agony of decision-making so intense you can escape only by thinking."

Funny thing is, according to Mrs. Friendly, no one knows to whom the original quotation written on the Scarsdale HS classroom chalkboard actually belongs. Mrs. Friendly says she tried to find out, but no one owned up to it. For more stories of her Edgewood days and our interview with Mrs. Friendly, please click this link to view the video.

Posted by Edgewood Snapshots at 11:45 PM No comments:

Every four years, since 2002, the students and staff of Edgewood School have participated in our own Winter Olympics. And like the actual International Olympic Games that "coincide" with our event, we also compete. But through these "competitive" games we internalize the values of the five Edgewood Olympic rings -- Caring, Kindness, Respect, Friendship, and Acceptance. During our Opening and Closing Ceremonies this year we recognized the importance of living in a global community and we saluted the nearly 80 national flags that represent who we are at Edgewood.

The event kicked off with an inspiring video featuring student coaches urging Dr. Houseknecht and Mr. Yang to get "back into shape." As a school we met the challenge of running a total of 1827 miles, the distance from the United States Olympic Committee headquarters in Colorado Springs to Edgewood. And as a school we also met Mrs. Turner's challenge of reading 1827 books. A goal that we shattered by reading 4,129 books.

We met every Olympic challenge as a team. During this two week event, students partnered with their "buddy" classes -- older and younger classes working together in a shared activity. The type of activities that former students tell us remind them of the importance of having the Edgewood School community in their lives. As Dorothy Bench wrote in our school song, we belong to "the finest place to be." It's a line that resonates with students long after they leave the Edgewood classrooms and playground. And it's a line we remember, long after the Edgewood Olympic flame is extinguished and just after we light it again, every four years. 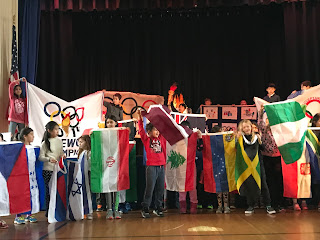 The Five Edgewood Olympics are about Caring, Respect,
Acceptance, Friendship, and Kindness 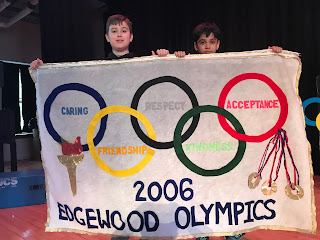 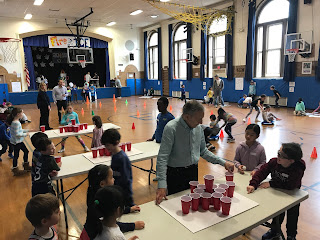 
Posted by Edgewood Snapshots at 10:22 AM No comments:

Edgewood produces three lunchtime talent shows each year. Needless to say, the staff and students involved put a premium on production value. It's one thing for students to invest time and creative energy into their performances, as former student Caroline Cavalier once reported. Or to host the shows as our student emcees do with fearlessness, humor, and style. But behind each performance is a highly coordinated team of students and teachers working as Balcony and Backstage crew. They balance music and microphone sound levels. They accentuate moods with stage lighting and lighting effects. They photograph and videotape performances. They coach performers. They open and close curtains. They coordinate and distribute wireless handheld and body microphones. They make sure that performers are patiently waiting in the "on deck" position. They interview performers backstage. They assemble and break down production sets. And this is the short list of our job responsibilities.

If the audience only notices the performers, then for us in the Balcony and Backstage, our job has been well done. If the audience and the emcees aren't forced to wait uncomfortably as the backstage crew sets up the next act, then our job has been well done. Let's take a peak behind the curtains at our final February talent show this year, as the backstage crew (and performers) take about 40 seconds to set up for the next act. And notice how the adults, purposely step aside, so that students pursue and achieve a shared objective. Go team! -- Paul Tomizawa

Posted by Edgewood Snapshots at 9:23 AM No comments:

Edgewood Snapshots
Scarsdale, New York
Each story told here is a "snapshot." A small moment or nugget of information. But when cobbled together across a timeline, these snaps convey a depth of love for Edgewood elementary, its traditions, and its hopes for the future. Ultimately these stories reveal a community of inspired and caring learners, which for those who have long since left Edgewood, continues to be, according to our song, "the finest place to be."